借鑑經典 與當下對話 Classics as Dialogue with the Here and Now

在大學書店舉行的研討會分為兩節。上午節是「與人文對話」，由獲得金獎的建築學生梁啟樞打頭陣，分享其論文Response to Lee Kuan Yew’s Paternalism: From the Perspectives of Huang Tsung-hsi and John Stuart Mill。梁同學借用黃宗羲及約翰．彌爾的思想，審視新加坡的政治狀況，指出不論是支持知識分子監察政府的黃宗羲，或是支持言論自由的彌爾，都不會認同李光耀操控言論的手段。他認為，控制言論對國家完整性或有幫助，但按新加坡的現況，這不足以成為打壓言論的理由，未來的新加坡更應開放言論自由。

The quality of reflection shown in the excellent essays made a strong impression on Professor Leung Mei Yee, Director of University General Education. In the welcome address, she expressed hope that the courses would only be a starting point, and urged students to delve further into the world of classics and think more. Reading classics might seem useless in the present time of instability, she said, but predecessors’ words of wisdom would always find relevance in the modern world.

The GE Student Seminar, held in the University Bookstore, was divided into two sessions. The morning session was dedicated to In Dialogue with Humanity  begun with a presentation by the Gold Awardee Leung Kai Shu, who majors in Architectural Studies. He shared his essay “Response to Lee Kuan Yew’s Paternalism: From the Perspectives of Huang Tsung-hsi and John Stuart Mill”. Adopting the perspectives of Huang Tsung-hsi and John Stuart Mill, Leung reviewed the political situation in Singapore and pointed out that neither Huang, who supported intellectuals to monitor the government, nor Mill, who supported the freedom of speech, would approve of Lee Kuan Yew’s control of public opinion. He stated that restricting freedom of speech might contribute to the unity of the country, but it would not justify the silencing of opinions in Singapore given her present state of affairs. He concluded that Singapore should promote greater freedom of speech in the future.

Lo Yik Shing, a student of Sociology, tried to compare Buddhism and Christianity and explore their fundamental differences and similarities in his essay “In Dialogue with Religion: The Nature of Faith in Buddhist and Christian Classics” (與宗教對話－從佛教與基督教經典看信仰本質). He pointed out that both religions understood suffering as the nature of life and emphasized faith as the path of liberation. The difference was that faith in Christianity was based on emotions, on a dichotomic worldview and on belief in eternity, while faith in Buddhism was based on understanding, on a holistic worldview, and on belief in impermanence. He also added that his essay only examined ideas from the texts studied in the course, and thus could not fully express the complexities of both religions. He hoped that the audience could continue to ponder on religions from differentperspectives.

Tam Hiu Fai from the Department of Physics reviewed the Occupy Central Movement in Hong Kong in 2014. He pointed out that society had to narrow down the divergence of opinions regarding the electoral reform. In his essay “Occupy Central and Genuine Universal Suffrage: A Study of the Pros and Cons of Government for the People and Government by the Peopleand Their Possible Integration” (〈從佔領運動所爭取的「真普選」探討民本、民主兩種思想的利弊和結合的可能〉), he invented a dialogue between Huang Tsung-hsi and Rousseau on “genuine universal suffrage,” with Huang supporting government for the people and Rousseau supporting government by the people. After exploring the pros and cons of each of the two theories, he tried to integrate them in an effort to draft a feasible proposal for universal suffrage . Tam considered government of the people more important than government by the people, therefore adopting the former as the core and the latter as an additional condition of his proposal.

During the discussion session, a member of the audience suggested that it might be inappropriate to set apart totally government for the people and government by the people. It was also pointed out that the features of the two religions were too complicated to be classified in dichotomy. Both students replied that they had not been able to fully present their arguments due to the word limit, and agreed that no easy dichotomy could fully express the complexity of the subject.

The afternoon session was dedicated to essays of In Dialogue with Nature. Cheung Nathan Tinwing, a Medicine Major, said that the course had inspired him to examine the nature of science and art. Hetried to compare the two in his essay “Finding the Art in Science—An Exploration into the Role of Subjectivity and Imagination in Science”. While science aimed at the discovery of truths, he said, art aimed at the creation of something new; science, therefore, was comparatively less unique. Nevertheless, he thought both science and art were influenced by human values and required creativity and imagination. He hoped that people would reconsider the necessity of antithesis between science and art by understanding their differences and similarities.

In her essay “The Beauty of Science: A Dialogue” (對話「科學美」), Zhang Xian, a year-3 Economics major, explored the beauty of science. In the scenario where a time machine brought Plato, Isaac Newton and James Watson together, Zhang inferred from the three texts studied that Plato would see the beauty of science in the pursuit of truth. For Newton, the beauty of science would lie in its regularity and predictability, and for Watson, in its simple universality and fortuitous inspiration.

Guo Xinyi of Geography and Resource Management pictured Henri Poincaré, Rachel Carson and Charles Darwin in a conference discussing whether the government should stop sponsoring space exploration and invest the money on environmental protection. In her essay ‘Home’ (〈家園〉), which was written in the form of a dialogue, she examined the relationship between scientific development and environmental protection and pointed out that the two needed not be a case of either this or that; advancing both causes would be the better option

The Best Essay Award Presentation Ceremony was held in An Integrated Teaching Building. Professor Poon Wai-yin, the officiating guest, and Pro-Vice-Chancellor and Chairman of the Senate Committee on General Education, said that the GEFP had won good acclaim and public attention in recent years. She was pleasantly surprised by the good quality of essays written by year one and year two students, which bore proof to the success of the programme. 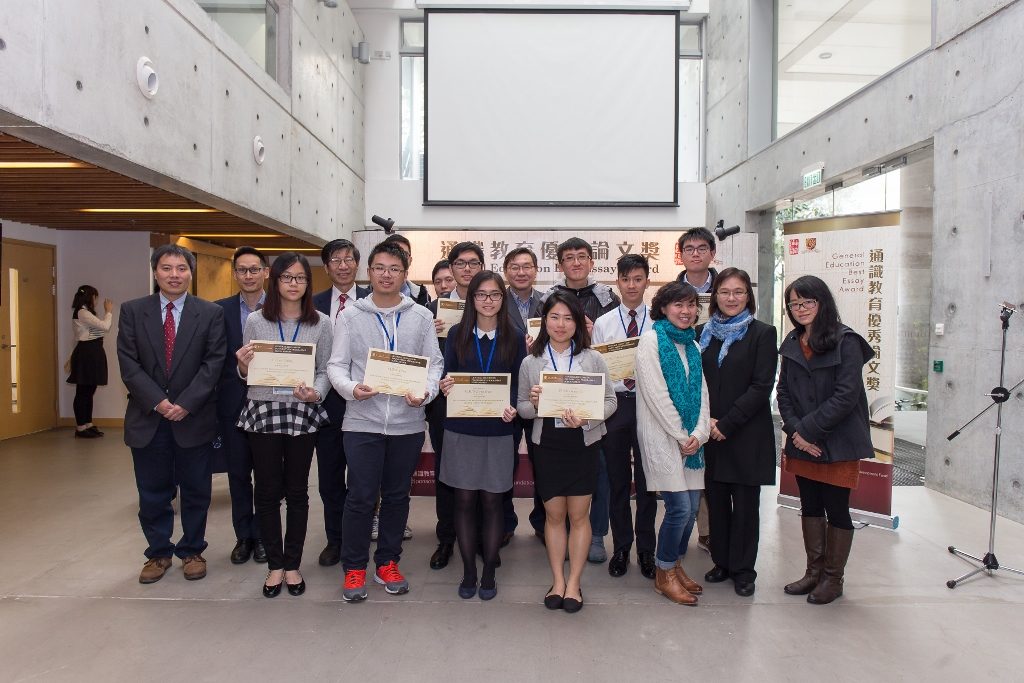 This year, there were a total of two students receiving the Gold Award, five receiving the Silver Award and eleven receiving the Bronze Award. There were also fifteen students who were awarded the GEFP scholarships. During the award presentation ceremony, a short video was shown in which of recipients of the scholarshipshared their experience and thoughts on the Summer Study Trip Scheme. Cheung Nathan Tinwing was selected as the Best Presenter of the day and granted an award. 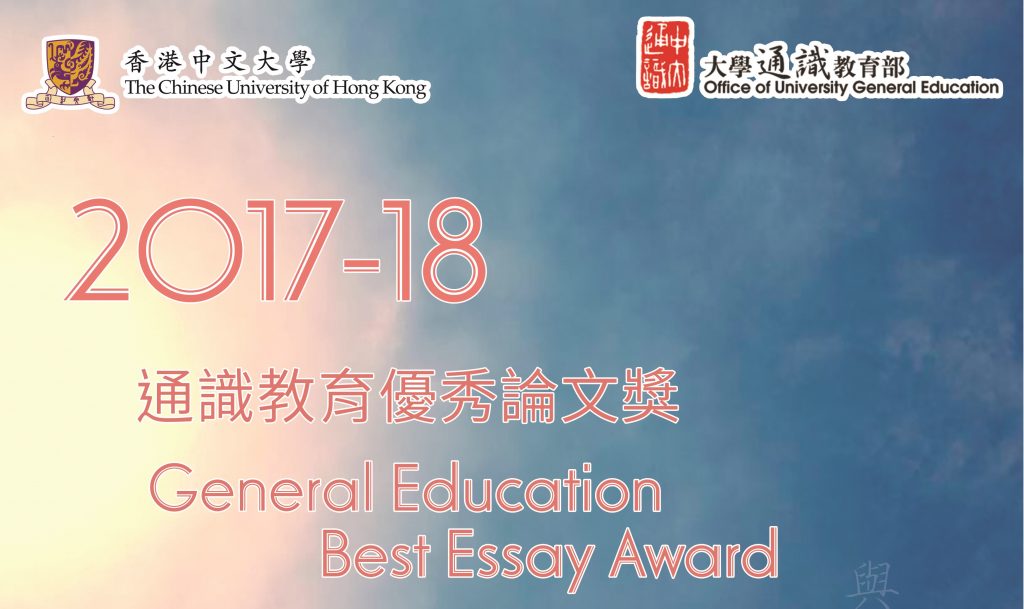